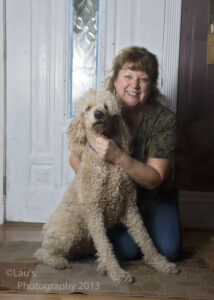 I am an experienced dog breeder who recently moved to Florida.  I live north of Jacksonville in Hilliard.  It’s a rural country town and my dogs have lots of room to run and play.

I have been breeding dogs since the early 2000’s.  I had the expertise and knowledge passed on to me from a wonderful veterinarian.  Dr. Art Neves taught me about the entire breeding process and even allowed me in the operating room while he performed a cesarean section on one of my females.  His patience and experience that was shared with me will always be a valuable part of my breeding.

How Doodleburg began…. once upon a time…..

With life as we know it, we grow up, fall in love, marry, have children, (sometimes not in that particular order), raise them to the best of our ability and then slowly, hesitantly, we let them spread their wings and fly…then we have empty nest syndrome.   That is exactly what happened to me and how Doodleburg began.  That was over 20 years ago and Doodleburg was located in Northern California.

I have recently moved and with the move I felt it was time for a new beginning … so I created Karen’s Honey Doodles.

My Poodle and Doodle Family

My first purchase was Raine in November of 2008. She came to us from Chicago, Illinois. As a puppy she was a gorgeous red poodle but has lightened into a soft apricot. She is kind, gentle and very affectionate. She has proven to be a wonderful mother with the two pups that she whelped. She was not able to conceive more than one pup per litter and I decided to retire her and place her in a new home.  She is now living with a retired gentle man who has made her the center of his world. She is no longer a princess, but the queen of his castle. I am so happy that she has a wonderful forever home.

Bella came next in December of 2008 from the bay area. I felt Raine needed a playmate and Bella was 4 ½ months when she joined our family. She is black. She is full of life and a very active, happy girl. I bred her shortly after her second birthday. She and Meatloaf produced a beautiful healthy litter of 12 puppies.  Bella has produced some of my finest service dogs.  I have two of her females and am looking forward to breeding each of them as well.  Bella is now retired and enjoying the rest of her years as the center of someone’s world.

Meatloaf was the big guy who I found on the internet. His owners had relocated to a small apartment and could not keep him. I had paid stud fees in the past and decided to purchase my own stud muffin and with his dreadlocks and gentle heart, he is the gentlest giant of all. He is a large blue. His black is fading and with each haircut more of the blue comes out. On the pictures you can see that when fully blued, he will be an elegant charcoal grey color. He has sired 4 litters so far.  He is OFA Certified as well.   Meatloaf lives with a friend and comes home for play time and loves everyone.  He is the best papa and plays so well with his pups.

Daisee Mae is a labradoodle that looks much more like a big bear.  She joined us in March of 2011 from Redding area.  She is ½ Labrador retriever and ½ standard poodle.  Daisee has an awesome personality and loves kids, puppies and everyone she meets.  She is now retired and living with her dad on a ranch in Redding.

Next came Lillee, a golden doodle who arrived in April of 2011 from Arkansas. She is ½ golden retriever and ½ standard poodle. Lillee’s mom, Hickory Hills Little Red Iris, is a dark golden retriever and her dad, Attaboy Pierre is an apricot colored standard poodle.  She is an F1 golden doodle. Both parents are AKC registered. She has shown an excellent temperament and gentleness.  We are breeding her and she has produced some exceptional puppies.

Paris is my apricot poodle.  She is AKC registered and a true beauty.  She is about 45 pounds and full of love and affection.  She is the one who is too spoiled.  Give her a bit of attention and she thinks she is a toy poodle who wants in your lap.  She has produced some beautiful babies and is an excellent mother!  Paris is now retired and living in Marin county!

My first Parti poodle is Harley, a parti girl.  She is AKC registered.  She’s a silver and white and is exceptional.  Her hips have been OFA tested.  She came to Doodleburg in October of 2013 and is extremely gentle and intelligent.  She is a spit fire full of energy and love.  She delivered one litter and it was a trying time.  She is now retired and living with a wonderful minister and his family in South Lake Tahoe.

Bradley is also a member of our Doodleburg family.  He is a red AKC standard poodle.  He comes from wonderful blood lines and was used as a stud with our labradoodle and goldendoodle in hopes of lighter colored puppies.  Honey Girl is one of his pups!

Samson is a large cream colored standard poodle.  Samson is AKC registered.  He is the pup of Pierre.  Paris is his grandmother!  He joined our family and is living with my niece and her family.  He has produced several beautiful litters.

Dr Brown is a chocolate F1 labradoodle.  Paris is his mama and Tank, a black lab is his father.  He sure doesn’t look like a doodle, but he is handsome, smart and very sweet.  His disposition is fantastic!   He is working as a drug detection dog in Las Vegas.

Pierre is Paris’ pup and Samson’s dad.  He lives in Corning and is available for stud service.  He is an apricot standard with green eyes.  He has produced some of the most beautiful apricot poodles ever!

Honey Girl is my newest goldendoodle.  Bradley is the sire and Daisy, a golden retriever is the dam.  Honey is an F1 goldendoodle.  She was bred in November of 2015 and produced a wonderful litter.  With her gentle nature and willingness to please, she produced beautiful pups.  She is now serving as a service dog in Santa Cruz, California.

Dallas and Mischief are my two sweet sisters.  They are AKC registered and are from Bella and Meatloaf. They were born November 3, 2014.  They were each bred twice and now are happily retired.  The family that adopted Mischief told me I should have named her “Disney” because she is the happiest dog in the world!

Maggie is an AKC registered brown and white parti.  She will be a year old in December of 2015.  Cannot wait for more parti puppies.  I bred her and she had stunning black and white parti pups.  She is now living the life of luxury in Sacramento.

Romeo is Maggie’s brother.  He is an AKC registered tri color parti poodle.  He has been bred to Honey, so we’ll see what color goldendoodles they produce.

Bear is an F1 labradoodle.  Daisee is his mama and Samson is his dad.  He lives with a family in Colusa and I have used him as a stud.  He is a huge boy and has a sweet, soft temperament.

Cooper is an F1 goldendoodle.  He lives with his brother Charlie in a guardian home.  Coop is a big boy with parti lines and is living the life with his awesome family in northern California.  He is now retired.

Possum is an F1 goldendoodle.  She has been living in a guardian home and has had two wonderful litters.  She has a great disposition just like her mama, Lillee.

Sunshine is an F1b goldendoodle. She is a gorgeous girl from Possum’s and Cooper’s last litter.  She is truly my sunshine and I am so excited to announce that she had her first litter on December 11, 2020!

When it was time to make the move across the United States, I placed the last three of my dogs as service dogs to people in need.  I chose to only bring Sunshine with me.  So with a new beginning, Karen’s Honey Doodles was born!

Since arriving here we have also added Miss Penny to our family.  She is a beautiful dachshund who loves everyone!

My dogs are my children and are part of our family. They live inside and outside. On sunny days they play in their yard and at night they cuddle on their doggy beds to sleep. They are more spoiled than my children were!

I hope you enjoyed learning about me and my pups.  I look forward to helping you in your search for the perfect puppy for your family.  Please feel free to reach out if you have any questions!